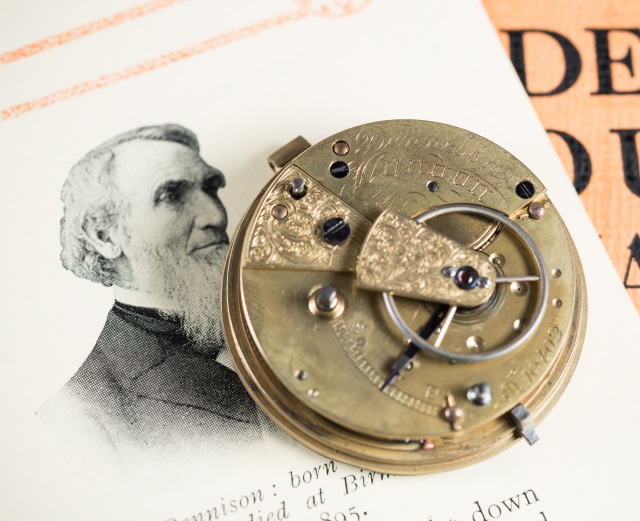 American born A. L. Dennison began his pioneering career in the watch industry by founding Waltham Watch Company. The company grew to become the largest watch
manufacturer in the U.S.A at the time.

In 1863, the talented watchmaker moved to Zurich in Switzerland, as he found the Swiss were more advanced in the production of watch parts. He joined Tremont Watch Company, heading the manufacturing side of the business and helped in the formation of International Watch Co.

In 1871, A.L.D moved to England and after a short time in London he decided to setup home in Birmingham. A.L.D found a niche in the market for high-quality watch cases produced in large numbers and patented many designs for air and watertight cases. Originating from a small workshop on the side of the family home, the company called Dennison, Wigley & Company grew to produce 100,000 high-quality watch cases per annum. A.L.D died in 1895, but left behind a very worthy successor in his son, Franklin Dennison.

Dennison Watch Case Co. Ltd was established in 1905 by Franklin Dennison and his son Major Gilbert Dennison, after acquiring the shares of Alfred Wigley.

Over the following 60 years, the company grew to become the largest watch company in England and known around the world for its fine Dennison Quality (DQ). Even with this success, the memory of the great founder was never forgotten, with almost all Dennison products signed with the assay mark ‘A.L.D’.

Dennison designed and manufactured watch cases for world famous explorers specifically for expeditions – in 1913 for Sir Ernest Shackleton’s Expedition to Antartica on the ship ‘Endurance’, and in 1953 for Sir Edmund Hillary and his team’s successful Everest Expedition (image adjacent showing an advert from 1954 published in the HJ). During the same year, Lieut. Commander Lithgow broke the World Air Speed Record flying over Tripoli, reaching a speed of 735.7mph (1184km/h), whilst wearing a Dennison Aquatite cased watch. 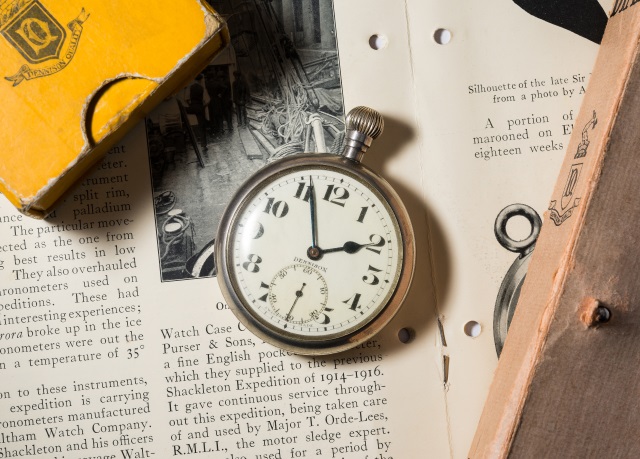 Dennison had a close connection with the British Military during the war years. During World War One, Dennison were manufacturing highly-durable wrist and pocket watches issued to the British Military, along with military compasses and other items (image adjacent showing a Dennison British Military issued pocket watch). During World War Two, Dennison temporarily halted production of watches and instead produced approximately 13,000 rocket projector beams for the Royal Air Force. The company director at the time, Arthur Dennison, also served as a pilot for the RAF.

Over the years, Dennison became most renowned for their close working relationship with watchmakers and retailers such as Rolex, Tudor, Omega, Longines, IWC, Jaeger-LeCoultre, Zenith, Smiths, J.W.Benson & Garrard. Dennison supplied them with the highest-quality watch cases designed to house the finest-quality movements.

50 years on and with over five years of research and development, Dennison are back manufacturing watches with cases made in England.

The revival of the legacy begins, with the famous Dennison trademark registered once again in England.

Dennison ended production after an illustrious history manufacturing watches for the British Military, world famous explorers and the best watchmakers in the industry.

“I carried your watch to the summit. It worked perfectly.” Such was the opinion expressed by Sir Edmund Hillary on his successful Everest Expedition. He and his team were supplied with thirteen Smiths watches with Dennison Aquatite cases.

Dennison were back in watch production and collaborated with Omega again to produce cases for the new Omega Automatic.

World War II saw Dennison temporarily halt production of all watches and instead produced approximately 13,000 rocket projector beams for the British Royal Air Force. The company director at the time, Arthur Dennison, also served as a pilot for the RAF.

Dennison were the largest manufacturer of highgrade watch cases in Europe, producing 250,000 per annum. Most of the production was contracted by watch companies such as Rolex, Omega and Longines for the British market. At the time, Dennison not only worked closely with these Swiss watch brands, but they were also a shareholder in Omega.

During World War One, Dennison supplied the British Military with highly durable watches, compasses and other items.

A.L.D was the first in Europe to introduce goldplated watch cases.

The very beginning of the Dennison legacy with A.L.D registered patent no. 356 for screw-back watch cases to be air and watertight.

A.L.D moved his family to Birmingham, England, via Switzerland, as he spotted a gap in the market for the mass production of high quality watch cases with Great Britain having the world’s best watchmakers at the time.

Aaron Lufkin Dennison founded Waltham Watch Company with two other colleagues which grew to become the largest watch manufacturer in the U.S.A. at the time.